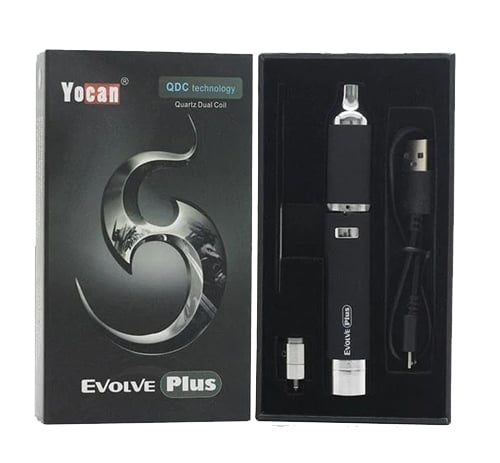 About Yocan Evolve Plus Vaporizer

WHAT’S IN THE BOX

This dab pen is an advanced vape pen designed and engineered for one goal – to be the ultimate wax consumption tool. The Yocan Evolve Plus Vaporizer has been famous for its simple and minimalist design with fast and quick results as well as its easy and straightforward operation. Even a beginner or a novice can pick up an Evolve Plus and vape like a pro. That’s why it's one of the most sought-after dab pen vaporizers on the market today. Both newcomers and experienced users find the convenience factor found in the Evolve Plus Vaporizer an irresistible allure. It eliminates the complication that one would have to go through should they want to experience professional-quality vapors. The Yocan Evolve Plus Vaporizer set you up for the same experience without the hassle of too much preparation. If you’re the kind of person who wants to spend more time vaping and less time preparing, then this dab pen is the perfect vape for you.
Sleek and Discreet

To turn on the Yocan Evolve Plus, tap the single-control power button five times. The light on the vape pen will again light up to indicate that it’s working. Pressing the same button 5 times when turned on will turn it off. The Yocan Evolve Plus Vaporizer is outfitted with 510-threaded connections so to remove the mouthpiece, simply twist the atomizer counterclockwise. A coil cap protects your mouth from spit backs which can also be removed by unscrewing it from the atomizer. Once the chamber is exposed you may load your desired amount of concentrate into the chamber. It’s recommended to place the wax concentrates directly into the coils but be careful not to touch the coils when loading your materials since it may damage them. Replace the components you removed, press and hold the power button and start vaping.

Although the Yocan Evolve Plus does not feature temperature control of flexibility, its temperature settings are fine-tuned and are calibrated for the perfect vaping temperature for wax concentrate consumption.
Iconic Vapor Quality

The Vapor production is backed by a powerful 1100mAh battery that’s twice as powerful as other vape pens that only sport a 652mAh battery. You can never go wrong with a Yocan Evolve Plus Vaporizer.

The Yocan Evolve Plus also comes in iconic designs everybody will love.
Built-In Wax Container

Despite Yocan Evolve Plus’ very small size, it amazingly comes with an attached wax container. This item is not only powerful but indeed convenient in every way. If you are looking for a vaporizer that is straightforward and simple yet highly portable, this Yocan product is for you!